Congestion was hampering throughput at some terminals last year as carmakers once again turned them into storage lots, but balancing port capacity is also a question of cargo mix and compound strategy

In 2019, passenger car registrations in the EU reached more than 15.3m units, an increase of 1.2% on the previous year, according to the European Automobile Manufacturers’ Association (Acea). That is the sixth consecutive year of growth for EU registrations, though the rate of increase has actually been slowing since 2015 and sales have been dwindling (see table), something exacerbated in the UK by Brexit uncertainty.

Vehicle production actually declined by around 5% overall in the EU last year and, at least among the majority of the top ten continental vehicle handling ports, volumes were slightly down as well. Nevertheless, congestion continued to be a challenge for ocean car carriers and terminal operators, as it has been over the last few years. The delays caused are a significant problem for companies working to fixed liner trading networks, with delays having ripple effects on their services. According to one short-sea provider, the congestion has been caused by carmakers looking for storage space.

“We have unfortunately seen an increase in inventory levels at ports in 2019. This is evident at all the major EU ports,” says Bjorn Svenningsen, head of sales and marketing at UECC, one of Europe’s main short-sea car carriers. “We believe this happened as the ports and terminals were used as storage areas because importers’ compounds were full as a result of lagging sales.”

That situation has obviously got worse since the coronavirus pandemic emerged this year. However, Svenningsen says that improvements in efficiency at certain ports, including Southampton (UK) and Autoport (Turkey), helped to reduce turnaround times in 2019, which was essential to UECC maintaining its fixed liner services.

That point was backed up by Europe’s biggest vehicle handling port at Zeebrugge in Belgium, which is also the busiest port for UECC. Zeebrugge saw significant growth in throughput last year. A spokesperson for the port says that it remained a challenge to find extra space to accommodate the demands of the port users, but like Southampton and Autoport, Zeebrugge has worked to improve throughput with some major reconstruction projects and IT investments (see the article ‘Blowing a bigger bubble at Zeebrugge’ in this magazine).

Wallenius Wilhelmsen Solutions (WW Solutions), the land-based division of the Norwegian shipping giant, has also noted an impact on services at its terminals in Zeebrugge and Southampton because of declining sales, but from its perspective the issue was more to do with filling empty capacity, which it was able to do with other products and new services.

The company saw some decline in automotive-related volumes subject to WW Ocean contracts, the vessel-operating side of the business, but that was offset by increases in high and heavy, and breakbulk sectors. In 2019 the company saw an historically higher mix of those cargoes, as well as an increase in hybrid and electric vehicles.

“WW Solutions has a diverse customer base and product mix and operates ocean terminals, so our business can be a little more insulated from regional weakness,” says Brett Bennet, senior vice-president of terminals and stevedoring operations at WW Solutions.

To make more room for this cargo mix, WW Solutions has expanded capacity for growth in Southampton by adding a new parking deck and, in Zeebrugge, by signing a lease to develop a 49-hectare site at Bastenaken.

Bennet says that cargo inventories fluctuated through 2019 for various reasons, including customer contracts and geopolitics, and that had on occasion led to overutilised facilities. However, he says that early problem-solving discussions with stakeholders ensured that throughput at WW Solutions’ terminals remained fluid to meet the ongoing needs of its customers.

“Terminals are designed primarily for high-volume throughput to keep cargo moving,” says Bennet. “Some storage is planned but we monitor it closely to make sure our terminals are a fluid and dependable part of our customers’ supply chains.”

He adds that WW Solutions’ cloud-based terminal operating system – iTOMS – also provided advanced planning and the capability to run through various scenarios to find the best solutions to the problems posed.

The iTOMS system was first used at WW Solutions Melbourne international ro-ro and automotive terminal (Mirrat) in Australia – and at the port of Southampton in the UK. Last year the company rolled out the technology in the European ports of Zeebrugge and Bremerhaven, and at the US ports of Baltimore, Brunswick and Port Hueneme.

Bennet says: “iTOMS… has helped us drive improved productivity and efficiency through better visibility, planning and greater command over execution.”

Striking a balance between congestion or under-capacity is one challenge for maintaining a productive and efficient car terminal, and cargo mix is part of that, but other factors include berth and workforce availability, and operations are currently subject to a limited planning perspective based on eight-hour (or sometimes a four-hour) shifts, according to UECC’s Svenningsen.

“The effect of the last factor is that even if the productivity could be 1,000 cars per shift, the terminal operator will still use eight hours even if there are only 300 cars,” he says.

Terminal productivity is also related to hinterland links and the adequacy of the multimodal options available. WW Solutions’ Bennet reports good rail, truck and barge connections out of both Zeebrugge and Southampton. The company is expanding rail capacity as part of the Bastenaken project at Zeebrugge.

For Svenningsen, however, the multimodal model only works when the carmaker has an incentive to move vehicles from the factory to the final customer. More common in 2019 was that OEMs pushed volumes to the port terminals and weighed up cost versus need with regard to onward multimodal links.

What UECC is looking for to improve port operations is dedicated areas for first and last points of rest (FPR/LPR) for the vehicles being unloaded and loaded, as well as self-movable units.

“We are working very closely with all the terminals to ensure that the FPR and LPR are sufficiently large, and to discuss improvements in stevedore flexibility, but this is challenging because of the historic regime for this,” says Svenningsen.

What UECC is also looking for is a longer-term rotation model that prevents independent decisions on carrier port calls, which leads to congestion when vessels call at the same ports on the same days and have to compete for stevedoring labour and berth space. Svenningsen pointed to the aviation industry as an example of how it could work for port calls.

For WW Solutions, meanwhile, there is a need globally to improve the overall digitalisation of the supply chain.

“Data exchange can be very manual and out of date with some of our customers, which can impact the quality and cost of services we offer,” says Bennet. “In some non-WW vessel operations, we may simply get a spreadsheet with the number of autos we are loading or unloading; this is not ideal.”

Automar Logistics, the Italian finished vehicle logistics provider, concluded 2019 with the buyout of AutoTerminal Gioia Tauro at the southern tip of the country – Italy's largest vehicle ro-ro terminal. The terminal was founded by Germany’s BLG Automobile Logistics in 1999 but Automar took a 50% stake in the terminal back in 2016. In January it announced that it had completed the acquisition of the remaining 50% and renamed the business Automar Gioia Tauro.

Automar provides port-based pre-delivery inspection services and road transport for finished vehicles. It is owned by shareholders Grimaldi Group, Bertani and Mercurio. The company already operates the vehicle terminals at the Italian ports of Civitavecchia, Salerno, Termini Imerese, and the inland facility at Pontegcagnano, also in Italy. Gioia Tauro, meanwhile, has 320,000 sq.m dedicated to the transhipment of vehicles.

Gioia Tauro’s strategic geographic position in the south of Italy suits Grimaldi’s ocean service network and the company makes 80 calls per year. Grimaldi’s fleet is composed of more than 130 vessels, with about 30 car carriers being deployed between northern Europe and the Mediterranean Sea, connecting Gioia Tauro to the rest of the network.

“The added value of Gioia Tauro, in line with the recent lack of space trend in the finished vehicle logistics sector, is to create a further entry/exit door for Italy, relying on an important terminal space and good rail connections,” says a spokesperson for Grimaldi.

1m sq.m of storage across facilities

Automar is using digital technology to make vehicle stock maintenance at its facilities more efficient. It is using an app called Automar Maint which supports smart maintenance by providing visualisation of the vehicle maintenance programmed by the system and the opportunity to confirm its completion. It also supports spot interventions, which are not programmed but necessary for the operators onsite. 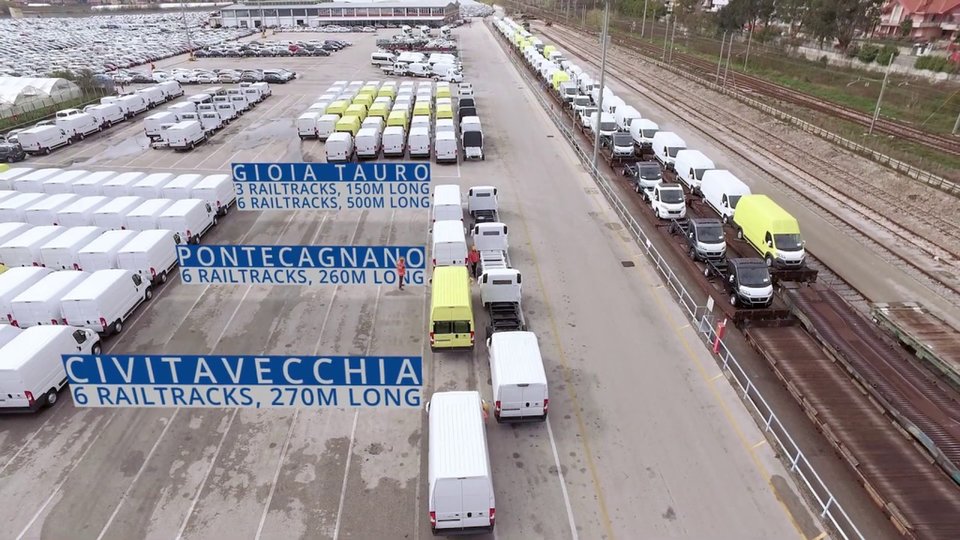 We have unfortunately seen an increase in inventory levels at ports in 2019.  This is evident all the major EU ports…[.] We believe this happened as the ports and terminals were used as storage areas because importers’ compounds were full as a result of lagging sales

Terminals are designed primarily for high-volume throughput to keep cargo moving. Some storage is planned but we monitor it closely to make sure our terminals are a fluid and dependable part of our customers’ supply chains

We are working very closely with all the terminals to ensure that the FPR and LPR are sufficiently large, and to discuss improvements in stevedore flexibility, but this is challenging because of the historic regime

Data exchange can be very manual and out of date…[.] “In some non-WW vessel operations, we may simply get a spreadsheet with the number of autos we are loading or unloading; this is not ideal