Communication is key in dealing with Covid

Good coordination between suppliers and logistics partners ensured a safe shutdown of plants and the storage of inventory across the network as the coronavirus hit. It was also crucial to the restart of operations, according to leading automotive players speaking at the finale to Automotive Logistics’ Livestream series of events, writes Marcus Williams

Improved communication and operational transparency has helped carmakers and tier suppliers on both sides of the Atlantic deal with the disruption caused by the coronavirus pandemic. It has also helped them recover manufacturing performance by closely aligning logistics and supply chain planning, though there remain some problems in transatlantic capacity and vessel scheduling. There are also instances of absenteeism in the logistics industry, which on the road haulage side of the business compounds the existing driver shortage problem. Nevertheless, collaborative support between carmakers, suppliers and logistics providers has helped to smooth the restart of operations after what was for some a very sudden shutdown.

In the two-part finale to Automotive Logistics’ recent Livesteam series of broadcasts, executives from VW, Honda Mexico and Benteler explained that good coordination between suppliers and logistics partners was behind the safe shutdown of plants and the storage of inventory across the network. It was also crucial to the restart of operations.
This was true for Volkswagen, which was able to react quickly to the impact of the coronavirus on its global operations. 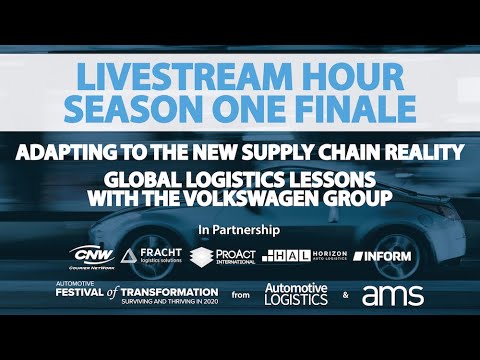 Watch: part one of the Livestream season finale, with VW Group's Matthias Braun

“We have been really lucky to have motivated partners within our supply chain,” said Matthias Braun, head of digitalisation and concept development for Volkswagen Group Logistics. “They managed operational things, including border crossing processes, with phenomenal energy and spirit, so were unaffected by any kind of traffic jam brought by border checks or closures. It was a tremendous job, which we highly appreciate.”

VW Group Logistics is the carmaker’s central supply chain management organisation that works across group brands. As well as digitalisation and concept development, Braun is also responsible for the purchasing and steering of the group’s global transport network. The division oversees a network of 8,500 suppliers around the world, shipping 200m parts daily to 53 component making facilities and 69 car assembly plants. That is equal to 250,000 containers of material daily, all of which goes to make 48,000 cars.

Braun’s division was heavily involved in using digital technology to optimise group logistics’ processes through 2019 and he sees the enthusiasm for gaining efficiencies through digitalisation continuing as the company manages car production in the wake of Covid-19. However, it was the more traditional use of Excel spreadsheet filesharing and regular Skype calls that really helped VW work with its suppliers and logistics providers on securing and delivering critical parts during the crisis.

Asked whether it was surprising to find that tools such as Excel were useful, given the advances in Industry 4.0 technology, Braun said it was a case of using the tools you could rely on.

“We have worked with it for 25 years,” said Braun. “You look for something you are used to and Excel was that. I know we have a lack of transparency in the supply chain and a lack of connectivity – part numbers versus bill of lading for instance. But it was great to see how many people asked for new transparency requirements.”

A similar point was made by Hector Martinez, division manager, Export Sales and CBU Logistics, at Honda de Mexico. He said the carmaker was using the same tracking tools to see when parts were arriving at the plant in Celaya. The difference in the continued impact of Covid-19 is that Honda is tracking further ahead and has increased the frequency of its communications with its suppliers and logistics partners.

“Usually we are tracking the parts that will arrive in the next three weeks. Now we are tracking for the next two months to ensure a fast reaction time in case one of our shipments gets delayed,” said Martinez. “We are increasing the tracking window and having very tight communication.”

That tight communication is based on nothing more than the use of social media platforms such as Skype and MS Teams.

“That is really the only technology that we are increasing the use of but it is about increased communication with suppliers,” he stressed.

Honda’s bounce back in Mexico has gone better than expected, according to Martinez. Daily production is running around 5% down on normal because of social distancing requirements but logistics is aligned with production and supported by returning demand for exports to the US.

“We don’t have any delay on parts supply and luckily we don’t have any delay on the empty equipment supply,” said Martinez. “[In early July] we had issues with rail equipment supply but it was just for one or two weeks at most. That was because the factories in the US all started at the same time and there were some bottlenecks for them, but now we are back on track.”

The situation is slightly more stressful for the tier one suppliers, according to Maxim Serov, supply chain director, North America, Benteler Group. The company’s plants in North America are now all up and running, and meeting customer demand, but Serov said the supply chain management teams were still under a lot of pressure.

“We have a difficult situation with the land freight right now, especially on the southern [US] border, where there is strong demand,” said Serov. “There is a lack of drivers, increased lead times and bad weather conditions. It all has to be managed. We are also experiencing a seasonal capacity reduction on transatlantic services.

The lack of drivers is a significant threat to inbound and outbound deliveries. The trucking industry needed tens of thousands of drivers even before the coronavirus hit but shutdowns and curbs on movement have disrupted automotive supply chains, and local containment policies have contributed to driver absenteeism, labour shortages and production interruptions. Social distancing and limited hours also continue to inconvenience newly trained truck drivers seeking to obtain a licence. As a result, it is estimated that in 2020 the US will produce 40% fewer new truckers than normal.

“Unfortunately, absenteeism is an issue right now in North America and I think it’s not only about the tier suppliers,” said Serov. “It’s impacting everyone. As we know, the situation is quite difficult with some OEMs and unfortunately logistics service providers are also suffering.”

According to freight companies that Serov has talked to, some truck drivers were not returning from the government furlough schemes designed to provide fiscal support.

“Some truck drivers are getting support from the government and actually they are not coming back. So, that’s the challenge and, as I said, we see right now a strong demand,” he said. “We’re hearing a lot of talk about the lack of drivers and the lack of capacity, especially on the southern border, which makes us, of course, a little bit nervous about that.”

However, Martinez said this was less of an issue in Mexico, where staff were more intent on continuing to work and securing a full salary, compared to workers in the US who were happy to take government furlough income in exchange for wages.

Martinez did recognise that because of a lack of manpower at the US ports there had been some congestion affecting vehicle imports but he looked forward to the situation improving through August when the government support scheme for furloughed workers came to an end and people went back to work.

Benteler's plants are now all up and running, though there remain some supply chain pressures

Rough with the smooth

Braun said that VW’s supply chains were now stable and things were running smoothly. The carmaker is providing its suppliers with the production figures it needs to achieve and sharing forecasts on weekly volumes with its providers.

“We always wanted the forecast system but it was difficult to translate from part numbers to bill of lading, but we have been doing that from the beginning of this year and it works quite well. They can follow our weekly planning and follow up with their information from the suppliers.”

Benteler’s Serov said that disruption to oversea supplies from Europe and China had eased since the restart of production and there were not the same level of blank sailings but that there was a reduction in capacity on transatlantic routes.

“The shipping lines are reducing the number of departures from specific European ports, so for example, from the port we are using, instead of two departures there is one,” said Serov. “That means we are losing the flexibility and we are losing one week because we don’t have the second sailing. This is new and during this we have our safety stock of components but it is a new challenge and we have to cope.”

At Honda in Mexico, production and outbound supply is smoother in the fourth quarter.

“We have to meet our customer demand but so far, at least for the Mexico side, it has not been an issue,” said Martinez.

Not only that but the more perennial problem of vandalism on outbound shipments in Mexico seems to be largely dormant, though quite how much this has to do with good countermeasures taken by the government and how much to do with the simple fact that volumes have been down remains to be seen. Nevertheless, in the time that Honda has returned to near normal levels the results have been good, according to Martinez.

“In these months that we have had normal volume the company’s countermeasures have been extremely good and we have had good results on that side,” he said. “So we need to review if they can keep these so that are vehicles stay safe in transit to the US…[.] We need to keep a close eye on this over the next three or four months.”

We have been really lucky to have motivated partners within our supply chain. They managed operational things, including border crossing processes, with phenomenal energy and spirit, so were unaffected by any kind of traffic jam brought by border checks or closures

Unfortunately, absenteeism is an issue right now in North America and I think it’s not only about the tier suppliers, it’s impacting everyone. As we know, the situation is quite difficult with some OEMs and unfortunately logistics service providers are also suffering